Well gang, the 2022 Stealth Sqdn outdoor flying season got off to a strong start on Saturday May 14.

The weather at Woodsom Farm in Amesbury, MA started off with more wind than expected.  But the wind moderated by midday and many long flights were made.

Flyers were productive over the long winter building season and several new models were seen in the air.

Sean R entered a great flying Leopard Moth in the Golden Age Civil event.  We think this was from an EasyBuilt kit.

Several Comet T-Crafts from the Indoor One Design event were seen flitting about.

And there were many more.

Camaraderie and freindly competition is featured in all Stealth Sqdn meets,  but there were a couple special moments at the May 14 meet.

The P-51 “Old Crow” flew straight and long using up much of the field to edge out Tom N’s Polikarpov I-153.

Sean in turn got edged out in the Golden Age/Modern Civil event.  His DH Leopard Moth just couldn’t hang in there against Rich Z’s Guillow’s Fairchild 24 which was flown by Evan P.

It was a great day.  See you in June  at the Ipswich Polo Field meet skyster!

Whew, we’ve got lots of info to share about upcoming club activities!

First, your last opportunity to fly Indoors this season is this coming Sunday April 3.  Yep,  we’ll be flying in  the Penn Brook Middle School gym in Georgetown MA.  Check out the flyer at top of this post for the Event roster.  See you there!

Good news here gang.  A full slate of dates has been set for Outdoor Meets at fabulous Woodsom Farm in Amesbury MA.

Check the Upcoming Dates in the sidebar, or the Calendar page of this site and mark you calendars.  Time to get those new models finished up and ready to go!

We’ll be flying many of our popular events at these meets.  Look for the specific Contest Flyers to be posted as the dates approach.   We’ll be posting the Pinkham Field (Durham CT) meet dates soon too.  Lot’s of flying is on the horizon for 2022 for sure! 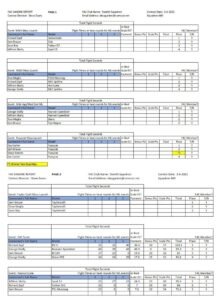 Click on the Contest Flyer image at left to view the details.

While you’re at it check out the Feb 6 contest results at left as well.

Oh, and there’s only about a week to ten days left to get in your Postal Dime Contest entry.  We’ve had a few more entries and it looks like our southern flyers are in the catbird seat again!  Will it be you that gives the C’ville Flyer a run?

You may recall that clubster Steve Evans ran a model airplane building class last year where a bunch of folks built and flew his Skylark design.  If you missed it, check out the report with pics here.

Well, Steve’s at it again and the new Roudenbush class will start on March 16.  There’s still time to Register, but you better do it quick!  Click on the link below and the Hobbies/Gaming subheader link from there to register.

The 30 inch wingspan Condor pictured in flight in the header photo will be the class build subject.  This is a bigger model than Skylark and will be just a super flyer.  We really like that flat wing center section.

Hopefully, we’ll see a bunch of these flying out on Woodsom Farm this coming outdoor season. 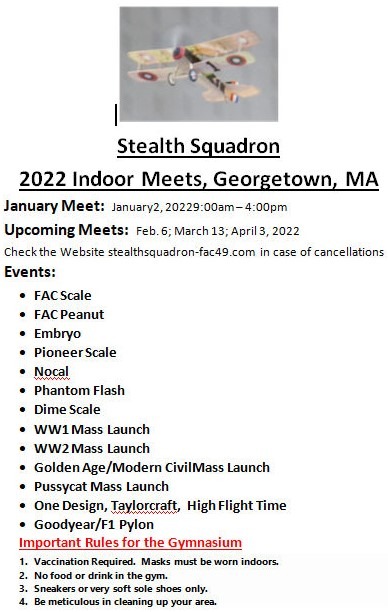 The header photo above shows the gang getting the rules rundown on the Pipit “12 Minutes of Georgetown” – an event where Pipit flyers scramble to make as many laps around the balloon tethered around the orange cone set at center midcourt.  It was exciting to watch as some flyers turned their Pipits left while others turned in the opposite direction.   At the March 22 meet we’ll be flying the Pipits in head to head pylon racing – be there to join the action…or at least observe.

Thanks Andy F for the photos!

fly in the gym!

OK gang, the weather’s turning colder and the Indoor flying season is here.

There are lots of opportunities to fly free flight rubber in the gyms.  Don’t forget to build your Pipit and join the fun!

“click the links below to view flying dates in Georgetown, MA and Glastonbury, CT”