Send your pics & vids to admin@stealthsquadron-fac49.com

News Flash!  Angus has spotted how incredibly cushy those flyers in the Southern Sqdns have it.

50 degree weather in mid-January – why, he says that just isn’t right.  Kinda like Brady and Gronk winning the ‘Bowl  for a southern team not to be named.  Angus has ordered this fixed and quickly!

Angus has decreed  that the Contest be split to honor both holders of the Blue Max and those whom have not yet achieved that lofty perch in the Flying Aces Club (16 wins in FAC competition).

The Squadron Commander’s Cap will remain the sole prize of the top scorer on the Tallyboard , but now a Kanone will be awarded to the top Non Blue Max (NBM) finisher as well.  If an NBM is the top scorer on St. Patty’s Day (March 17, 2021), then she or he will take both the Cap and the Kanone!

Stay warm out there –

Zounds!  Has that ghastly Hun Hanz from The Cursed Squadron survived, taken a pseudo-name and commandeered this cute little Swiss Franc (top left) for his dastardly act?

How can such an innocent craft – a reindeer on its sides no less – be used as a tool for mayhem?

Because that’s what this has become.  The taunt from Trailing Edge himself at the bottom of this post confirms as much.

He even said the Tom Brady thing…  Of course, he wouldn’t sign Hanz.

If ever there was a need for Jack Sharpe on the case, this is it!

Sacre Bleau!  Like a vagabond on a midnight train, a mystery flyer named Trailing Edge has slipped into our little Postal Contest.

He is the new Wing Commander – and his lead seems insurmountable.   Oh my!

OK now.  We know this event is for fun…sort of like the Drew Carey show where the points don’t matter.  It’s about the show.

BUT…. the Sqdn Commander’s cap spirited away to a place that’s for Lovers?  Pffffftttt!

So, let it snow, let it freeze.  Let the Bonus rise and our models rise further.  It’s not over til it’s over.  Get out there gang.

Send pics & vids of your winter flying adventures to admin@stealthsquadron-fac49.com and we’ll put them up here.

Model Bonus and Temperature Bonus this year.  Use the Postal Timesheet form in the Sidebar or on the Postal Contest page. 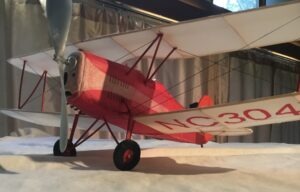 Well gang, things are just not looking good for our indoor flying season this year.  Given that, we’re going to re-run our virtual Dime Scale Postal event this winter.  We had lots of flying and good light-hearted competition last year so let’s do it again.

Remember, anyone can enter and win whether you’re a Stealth Squadron member or not.  Yes, there’s been some overzealous talk of Dimer duels, but we know this is for fun.   It’s all about getting your model and  moniker on the tallyboard (see Postal Page).

The Contest starts on New Year’s Day Jan 1, 2021 and ends on St. Patrick’s Day March 17, 2021.  All flights are to be made outdoors and there will be a Temperature bonus like last year.  That’s right, the colder the day you fly – the more bonus added to your flight time!   Bonus points for your model will be added as well, per the official FAC Dime Scale rules.

Check the latest Results on the  Postal Contest page – we’ll post the top 20 times submitted.  Rules and online Timesheet Form can be found on that page.  Look for the Timesheet Form at the bottom of the sidebar throughout this site as well.

Kick off this new decade with style and submit a flight.  Have fun with it.  We’ll post photos or videos of your model or flight on the Stealth Sqdn site too.   Just send them to admin@stealthsquadron-fac49.com 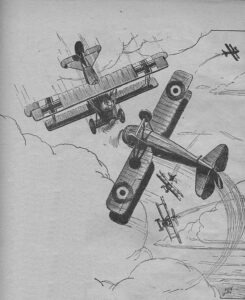 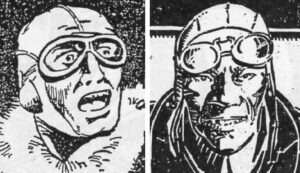 Despite the November date, we had perfect “light and variable winds” conditions for our fourth outdoor contest of the season at Woodsom Farm.

The grass was still soft, the sun still shining warmly, but the foliage was well past-peak.  A full slate of Mass Launch events were flown and the less rigorous FAC Simplified Scale was substituted for the scale-judged Flying Aces Scale event. This freed up time for all to fly – and that folks did – putting up many high and long flights in the light air.

The meet ended a few minutes earlier than usual due to Daylight Savings Time, but all seemed interested in flying more oudoors in coming months, even if on a smaller field and in the cold.

So stay tuned to this site for more opportunities to fly!

See you on the flying field!

Check out the Contest Results and Photos from our latest November 8 meet at Woodsom Farm!

3 cheers to the contest director!

The third outdoor contest of the season took place on a gorgeous fall day at Woodsom Farm. The foliage was at its peak, the grass soft and just the right height, and even Covid couldn’t keep flyers’ spirits (or models) down.

Special thanks go out to the many flyers who traveled some distance to fly and compete in the contest. Several new flyers were in attendance and we look forward to seeing them back on the flightline soon.

We have another outdoor meet scheduled for Sunday November 8 at Woodsom Farm in Amesbury.  Check the date on the Calendar to view the full Contest Flyer.

3 cheers to the contest director! 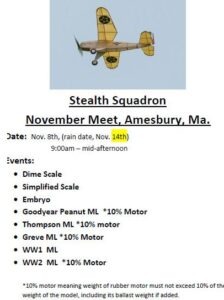 Whew!  There’s a lot of free flight rubber powered model airplane flying going on at Woodsom Farm in Amesbury – and that’s a great thing!  Yessir, the stealthy brass hats at GHQ have decided that more flying is just what we all need these days.
What nice folks, eh?  (now don’t you skybosses go gettin’ noggins too big for your brass hats now.)
As usual, all events and details can be found on the Contest Flyer at left and at the link below.   A “rain date” Saturday 11/14 has been reserved in case the weather fails to comply.  Check this site and your email as Nov 8 approaches to confirm the date.   As usual masks and social distancing protocols will be observed at this meet.

And because it’s been helpful, here again is a link to the

All mass launch events except WW1 will be flown on 10% rubber motors to shorten retrieval time.  Note that due to daylight savings time, we may draw the meet to a close a bit earlier than usual in the afternoon.  Not to worry though it’ll still be worth your trip to beautiful Woodsom Farm in Amesbury, MA which is about 30 minutes north of Boston.

Hope to see you there!! 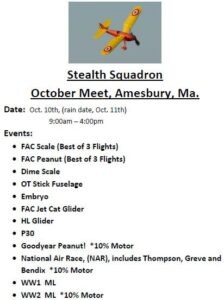 UPDATE: Due to more favorable weather/winds, the October Meet will be held on SUNDAY OCT. 11, 2020 and NOT Saturday 10/10 as originally scheduled.
All events and details other than the date will be the same on the Contest Flyer at left and at link below.  See you at Woodsom Farm this Sunday!
Well, the gang had so much fun and good flying at the September meet, that we just had to schedule another one.  That’s right skysters, Sunday Oct 11, 2020 we’ll be gathering again to fly on the beautiful rolling fields of Woodsom Farm in Amesbury.    You won’t want to miss this one as its going to be a long winter and who knows if indoor flying will be happening at all what with Covid and all.  So..

Location will be at Woodsom Farm in Amesbury, MA about 30 minutes north of Boston.
Hope to see you there!!

The second outdoor contest of the season was held September 12, 2020 on the beautiful rolling green fields of Woodsom Farm.

With Covid 19 still a threat, masks and social distancing protocols were in practice throughout the meet.  This was no great setback to the strong turnout of flyers who came to fly their models and enjoy light breezes and strong thermals this fine autumn day.

Competition was hot as were the thermals.  Unfortunately a number of fine models were lost OOS (out of sight), or over the hill.  The gang will be busy this winter building season rebuilding the fleet!

We have another outdoor meet scheduled for October 10 at Woodsom Farm in Amesbury.  Look for the Contest Flyer coming soon on this site.

We just completed a great contest on August 22nd on the beautiful rolling fields in Amesbury.  If you missed out, here is another chance to fly free flight rubber with us on the 12th of September.

for rules), and special, unofficial, Cricket contest (read about the model and download plan here).

Location will be at Woodsom Farm in Amesbury, MA about 30 minutes north of Boston.
Hope to see you there!!

From the Flight Line