Model Building demos, flight videos, raffles – the gang pulled out all the stops.. 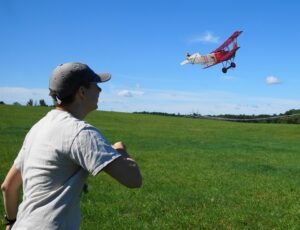 It’s too easy nowadays to forget what things used to be like.
You know, kinda like that huge splash the Stealth squadroneers made at the 2020 New England Model Engineering Society (NEMES) show.

You may recall that we had a table at the show last year which brought lots of audience interest.  That led to our exhibiting again this year – in fact, our models were featured prominently on the Event Flyer (left column).

The club rallied and met prior to the event, brainstorming several exhibits and then preparing for the big day on Feb. 15, 2020 at the classy Charles River Museum in Waltham.  It all came together flawlessly – what a team!

The Stealth table at NEMES featured the Rittmeister and George S. both building model airplanes in real time.  Rich put together a Pipit ROG and George a Tomahawk embryo endurance model.  The Pipit was raffled off later at the show along with a Piper Cub FF scale model from the Eph estate.  William S. did the raffle awards and boy, were the winners thrilled!

Steve E. and William S. answered many questions at the table from interested folks passing by  and handed out lots of business cards.

Tom N made sure the looping video and powerpoint photo slideshows were running properly.  Images on the big screen really grabbed the attention of show attendees.

After the show, the NEMES folks reached out to the Rittmeister and asked if we could make a presentation at one of their upcoming meetings.  Stay tuned for more on that skysters!

This site uses Akismet to reduce spam. Learn how your comment data is processed.